After writing about it over a year now, sinking the foundation poles last November, and a lot of other farm work in between, we've finally raised the roof on our wood shed/rain harvest roof/pole barn. We had the help of some friends, advice from others, and a really windy day to make the mounting of our last metal roofing panels that much more challenging. 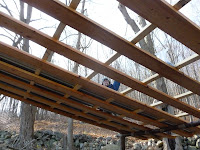 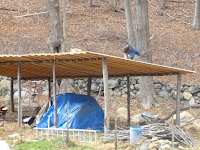 Posted by Longhaul Farm at 9:52 PM No comments:

Do it for the workers

We listened to a story this morning on the radio about immigrant farm workers in New York. Apparently, state labor laws do not apply to them: they are not entitled to overtime pay, have no right to a day of rest, and can not collectively bargain.

When will farm workers' wages be something us customers are willing to pay more for? I pay extra to buy organic seeds, organic food, free-range chickens. A lot of this extra cost is going to workers, precisely because there are some (organic farming is more labor-intensive than conventional farming). But why is it so difficult to get me to pay even more so the laborers who are planting and harvesting and packaging can earn a decent wage and a day off?

There are plenty of driven advocates working on this issue. But rather than tax incentives to farmers to encourage higher pay, I think we're in need of a cultural change. We all have to start paying more for our food. So farmers can make a living and their workers can, too.

But raising prices is not what most producers want to do. Perhaps we can start, market by market, with farmers collectively agreeing to charge a little more so they have more to give back to their staff. And we can continue, market by market, with creating educated consumers who learn to care more about the welfare of human laborers than a farmyard animal.
Posted by Longhaul Farm at 9:49 PM No comments:

In the wake of Superstorm Sandy, I, along with many others, have been thinking about climate change. I was engaged in a conversation just the other night with a family friend who does not subscribe to the argument that indeed our planet is warming due to increased emissions of CO2. So I asked him, "Why do you choose not to believe in it?" He immediately replied by asking me why I do believe.

I believe for three reasons.

First, I have concern for future generations of humans, wildlife and plants and the overall life of the planet. I do not want us or them or it to become extinct prematurely. Just as I exercise regularly to be sure I live long and prevent premature death, or someone quits smoking cigarettes or another person receives heart bypass surgery to do just the same, I am willing to take action to prevent the premature extinction of our earth and its inhabitants.

Second, I am a scientist. I have read research on global warming and climate change and understand the use of statistical models to predict the future, and based on my read of the decades of evidence, see a potential for truth. In other words, the evidence is strong enough to me that I reject the possibility that the patterns we are observing are happening by chance alone.

Third, I appreciate the argument's ability to raise ecologic consciousness. If I choose to believe that the warming of our climate, rising of sea levels, and melting of ice caps are a result of me and my fellow humans, it makes me very conscious of what I do on a daily basis. What natural resources do I consume, and can I potentially reduce my consumption? How far do products travel to get to me, and can I choose local purveyors to reduce that travel time? This daily self-reflection, I think, is healthy, because it makes me consider things in a broader perspective. It connects me to so many layers and nodes around the globe and empowers me to realize that what I do matters.

My friend's response to my question of why he chooses not to believe can be boiled down to two reasons, unfortunately (mind you, I'm boiling them down): because the solution costs too much and he doesn't like being told what to do. It's a fascinating response, and I wonder if there are other reasons to shrug off the evidence of climate change... in spite of the storm that flooded NY and NJ after years of rising sea levels and a changing jet stream. I am very willing to listen.
Posted by Longhaul Farm at 10:32 AM No comments:

It's getting cold outside, so we decided to enjoy a nice roast chicken - eating the first bird that we harvested a few weeks ago. It was tasty and substantial and we can't wait to appreciate more!

Posted by Longhaul Farm at 10:51 AM No comments:

Glazed roots (such as turnips, or carrots, radish, rutabaga, parsnips)

Preparing: Cut turnips to desired size. Melt a few tablespoons of butter in a shallow pan. Add turnips, sugar (can use brown or white sugar) and water (can use broth) and a pinch of salt. Cook on low heat, partially covered, until the water has evaporated and the turnips are glazed (the longer you cook the more caramelized the turnips will be- but be careful not to burn!).

Eating: A good side dish to add to your Thanksgiving table.

Dish history: Our take on the classic glazed carrots. You could mix a variety of root vegetables, I'm sure, but be careful of different cooking times. You could try honey or maple syrup as the sweeteners, too.
Posted by Longhaul Farm at 10:51 AM No comments:

Email ThisBlogThis!Share to TwitterShare to FacebookShare to Pinterest
Labels: recipes

After a long day of mulching and covering up vegetables, we voted. Hope you did, too. 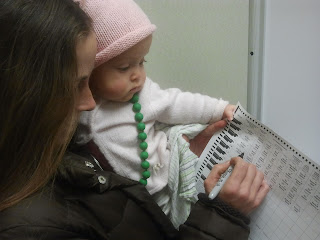 Posted by Longhaul Farm at 7:24 PM No comments:

We are starting to close up shop. We've got parsnips, carrots, beets, turnips, leeks, lettuce, collards, spinach, parsley, scallions, Brussels sprouts and cabbage still in the ground. But all the rest of our vegetable beds have been put to bed, with hefty doses of manure (thanks workationers!), compost and mulch. Nick is clearing a new field to the west of our garden where we will put our pigs this spring. The hens have been moved to their winter housing. We are burning the burn piles in the orchard space so we can bring in our friend with an excavator to dig 30 tree holes. Our roofing material will be delivered on Monday so we can complete the wood shed/rain harvest roof. And we are planning out the foundation for our future greenhouse. This point in the season is really a race against snow cover...

Posted by Longhaul Farm at 9:36 AM No comments:

Recipe with squash and greens

Preparing: Peel and cut a winter squash into cubes (the size of a dice; we used butternut). Put in baking dish, drizzle with oil (don't be stingy) and bake at 350 for 30 minutes (until perfect, not falling apart and not too hard). Meanwhile, in a saucepan heat olive oil (1-2 Tbsp). Cut bread into cubes (the size of dice) and fry in the hot oil until nice and brown. Add a bit more oil if necessary and add sliced garlic (3-5 cloves), ground cumin, salt and pepper. Cook until garlic has browned (which will give a nutty taste and aroma). Then pulse bread/garlic mixture in a food processor or blender to make breadcrumbs. In another, larger saucepan, heat some olive oil and cook chopped greens (we used collards). Once desired texture (collards took about 10 minutes), add 1-2 Tbsp vinegar (we used red wine vinegar) and cook off a bit. Add breadcrumb mixture and mix well. Then add squash and mix gently.

Eating: Great with a steak.

Dish history: Found this recipe and adapted it to use some of our sweet butternut squash and frost-kissed collards. It's a great way to use up some stale bread, too. The toasted breadcrumbs really make the dish.
Posted by Longhaul Farm at 8:37 PM No comments:

Email ThisBlogThis!Share to TwitterShare to FacebookShare to Pinterest
Labels: recipes

Using all of the parts

I hate wasting. I'll even re-use a piece of saran wrap or a pretty clean paper towel. So it's no wonder that I try to make use of all of the parts of the food I cook. I do things as obvious as making a stock out of a chicken carcass or toasting croutons out of stale bread, and will even be adventurous and use carrot greens and fennel fronds.

With recent estimates warning us that Americans waste nearly 40% of our food, I wish that some others might start to hate wasting as much as I do. Sometimes we waste because we buy too much, we over-consume, our shopping carts are bigger than our family's stomachs. And so food gets thrown out with the garbage. Other times we just can't be bothered to make use of it all - how many of us have been guilty of not making turkey soup after Thanksgiving? And a lot of the time we just don't have any idea what to do with all of those parts. It takes time and energy to be creative with your onion ends, flat beer and watermelon rinds.

That said, there are some things even I haven't figured out how to eat myself... and so there's always pets and composting.
Posted by Longhaul Farm at 8:52 PM No comments: